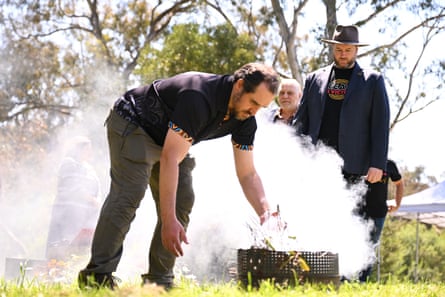 
Every year I attend the Invasion Day rally. I won’t be attending this year.

I’m a proud Nira illim bulluk man of the Taungurung nation so I know the importance of standing together in the fight for the rights of Aboriginal people.

I know that positive change isn’t delivered from above, but is fought for tooth and nail and won when us mob dig deep on our collective resilience and demand our rightful place in our country. So this decision isn’t one I’ve taken lightly.

But I can’t watch in silence while a handful of wreckers in our movement hijack the annual Invasion Day rally to stage a de-facto launch of the no campaign against an Aboriginal voice to parliament.

I can’t risk aiding the efforts to sabotage the best chance we’ve had to secure meaningful change to improve the lives of our people.

I want Aboriginal people to always have the power and freedom to make the decisions that affect our communities, our culture and our Country.

That’s exactly what we’re achieving by forging a path to treaty in Victoria, the most advanced state in these negotiations. This is self-determination in action – taking back control of our land and resources, economic autonomy and cultural authority.

The reason we’re making such strong progress on the shared journey to treaty in Victoria is because we have a collective and democratic voice.

A shared forum where all the opinions in our community can be heard and our people’s hopes, needs and aspirations can be distilled into a united position which we can fight for together.

That’s what we have in the First Peoples’ Assembly of Victoria, of which I am co-chair, and that’s what is on offer nationally.

A voice. An ability to have a say on the issues that matter to us mob; a national voice to parliament to use as a building block to pursue truth-telling and negotiate treaty.

It frustrates me that instead of seizing the opportunity to put our people in the driver’s seat, some choose to squabble about mechanics like sequencing and destroy our hopes for achieving “good” in their pursuit of ambiguous “perfect”.

Having a voice will be the beginning of the end of 230 years of policy being made to or for us, but never by us

Rally organisers who find themselves on the same side of history as Tony Abbott and Andrew Bolt in opposing a referendum for a voice like to think of themselves as staunch left activists, but in effect they are betraying the cause. They’re sabotaging our best shot of securing tangible progress for the majority of Aboriginal people. For what? A feeling of superiority and a handful of Twitter followers?

I’ll be saddened by not marching this year, but in spirit I’ll actually be standing with the 86% of Aboriginal people that support a voice to parliament – who can see what we stand to gain if the referendum succeeds.

Having a voice will be the beginning of the end of 230 years of policy being made to or for us, but never by us. We know this land, we know our communities, we have the solutions – voice is our chance to implement them.

When our Assembly was first established it had its detractors – the very same people now fuelling a no vote.

They claimed it was too weak and picked flaws in the process. Yet here we are three years later building our collective power and making history. We’re actually doing the change they’re speaking about – we can do it because we have the power of an elected voice.

We’ve got a formal truth-telling process up and running. We’ve negotiated the creation of a Self-Determination Fund to generate wealth for generations to come. We’re establishing a Treaty Authority that will sit outside of the colonial structures and be grounded in our own lore and law.

In May we’ll hold statewide Assembly elections so mob can choose who will negotiate the first treaty between traditional owners and a government in Australia. A treaty to transfer power back into the hands of our community so we can end deaths in custody and reform the justice system, so we can veto unwanted developments on our lands, so we can bridge the economic divide and re-level the playing field, so we can ensure our culture and communities thrive.

I know tens of thousands of good-meaning allies will fill the streets on Thursday to stand in solidarity with our people. To them I say, thank you. But remember that our community is not a homogeneous group. Know you risk standing with a vocal handful that talk loud but shun the collective and turn their backs on every chance to make things better.

When history calls later this year in the form of a referendum I hope you answer the call by voting yes. If you are still unsure, my tip is to look to the forums and organisations that are actually accountable and representative of the communities they serve. The ones with governance structures that are both democratic and shaped by our cultural way of doing business.

Such a democratic and participatory body is missing at a national level, which is exactly why we need to support the voice to parliament and why I’ll be voting YES.