Kay Burley sat down with President Volodymyr Zelenskyy in Kyiv for an exclusive Sky News interview.

In a wide-ranging discussion, everything from tanks, family, Vladimir Putin, Boris Johnson and the president’s birthday were covered.

Here are five key points from the interview.

Russia sends warning to US over tanks – Ukraine latest 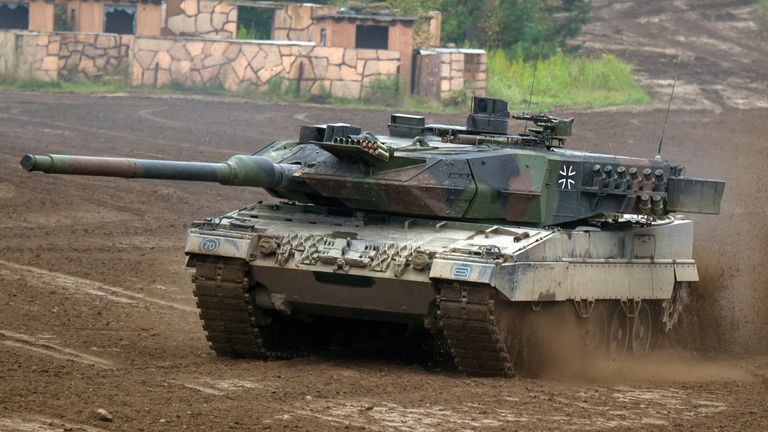 Why does Ukraine need new tanks?

The president explained that Russian tanks vastly outnumber the vehicles that Ukrainian forces have at their disposal.

Mr Zelenskyy, who learned of Germany’s decision to send Leopard 2 tanks during his Sky News interview, said he wanted to thank Europe and the US – but added that they couldn’t waste any time in getting them to the frontline.

He said: “We need 300 or 500 tanks now. That’s why I believe that we need tanks to carry out an offensive on our territory, on our land. We need armoured vehicles to protect our people, that’s all.

“I am very happy and I would like to thank Germany, thank Britain, and thank the United States that they made such decisions. Overall I am grateful to the world for their support of Ukraine.

“But if we are talking frankly and honestly with you, the number of tanks and delivery time are of crucial and critical importance, in comparison to the decision that has been made. We have approved cases of weapons to be sent to us, but we still haven’t received them.

“Sometimes the delivery of the weapons takes months, you understand? I don’t blame anyone, but, in response to your question, a sense of relief comes only after the weapons, which our partners give us, are already being used by our army.” 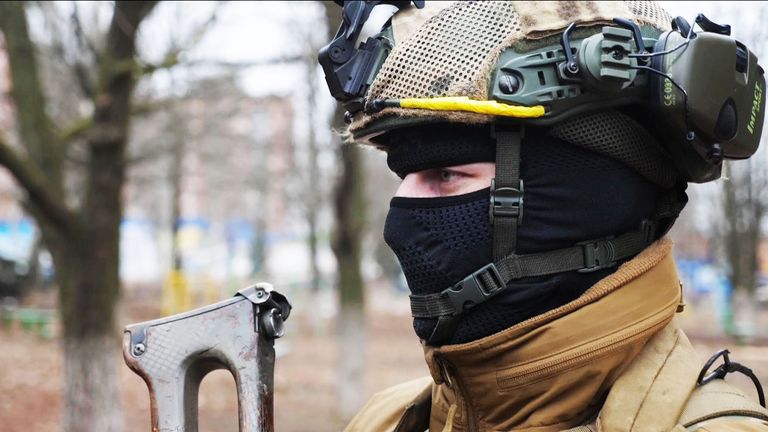 Soldiers get ready in Bakhmut

On fighting the Russians

Mr Zelenskyy explained he had no designs on taking territory in Russia, saying all he wanted was for Moscow’s forces to leave Ukraine.

“Because the war, wherever it is, means losing people. For me, people are the number one priority. That’s why I don’t want to fight on Russian territory.

“I just want them to stop the war as quickly as possible and leave our country as fast as possible.

“I can tell you for sure if they leave our territory the war will stop. That’s all.”

On peace talks with Putin

Mr Zelenskyy said that peace talks with Russia while Vladimir Putin is still president would be pointless.

He said: “You know, so far there are no peace talks with Russia … because we don’t know who we should negotiate with, and about what. What kind of peace talks?

“At present, these are just criminals who came here and were killing and raping. That’s what they have been doing.

“And having the whole world helping Ukraine now – he is not thinking about that. He is thinking ‘Well, it’s not working out in Ukraine now but we will wait … the world won’t stay united, they will get tired and I will move further.’

Read more:
Zelenskyy ‘thankful’ for tanks but warns quantity and delivery time is ‘critical’
Germany to send 14 Leopard 2 tanks to Ukraine
What are Leopard 2 battle tanks?

The president added that, before the invasion, Putin never met for talks because he had no intention of preserving peace, saying: “He was just trying to mislead us. He doesn’t want negotiations because he doesn’t want peace. He can slow down things.

“They were sending messages about peace talks, and we have proof of it, only when they needed time to regroup on the battlefield.

“We hope that once Russia pulls its troops back to their territory, they will admit their big mistakes, and there will be a new government in the Russian Federation. We are neighbours. It will be only then that we will be resolving this situation. Then, probably, talks will be possible.” 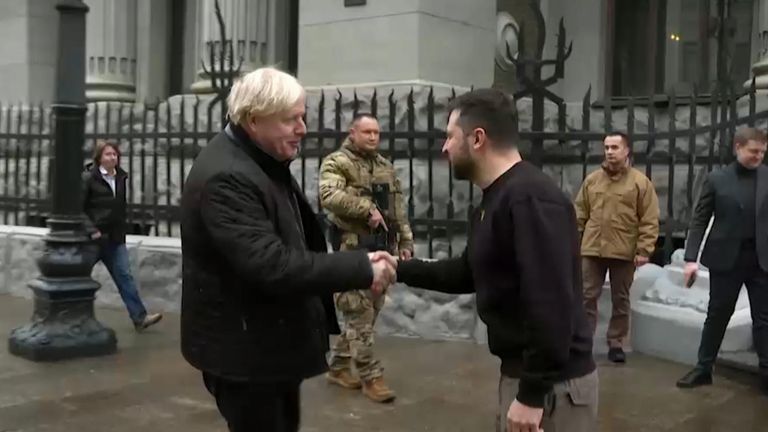 Asked if he would welcome Boris Johnson as the UK’s special envoy to Ukraine, he enthusiastically agreed – describing the former PM as a “good guy”.

On never losing his sense of humour

Before a life of politics and war, Mr Zelenskyy was an actor and comedian.

“I think when people lose it, they lose … state of mind. I think so. You have to concentrate and be very serious not during months.

“You have to be strong and that’s why sense of humour shows, when you can joke, show sometimes of course, show that you are okay, that you are strong, that you control the situation.

“It’s very important to control the situation. And that’s it. Nobody can make decisions without you. Because then the result, so, I mean, the result depends on you.

“So that’s why you have to concentrate. And humour makes you human.”