The Shin Bet security agency on Wednesday said Israel was revoking the entry permits to Israel from 230 Palestinians in the Gaza Strip, relatives of Hamas members who allegedly worked to recruit West Bank Palestinians to help commit attacks.

In a statement, the Shin Bet said in recent weeks dozens of West Bank Palestinians had been arrested and questioned over their alleged ties with Hamas operatives in Gaza. The agency said many of the young suspects were unaware that Hamas was using them to prepare attacks against Israeli targets.

According to the Shin Bet, the Hamas operatives hid their real identities by masquerading as companies and other entities, while recruiting West Bank Palestinians for paid work.

The Palestinians in the West Bank would be tasked with transferring funds intended for purchasing weapons or delivering packages of weapons and ammunition to Hamas operatives, it said.

“All this is without the couriers being aware, in most cases, that they are transferring weapons or are involved in terror activity,” the Shin Bet said.

The agency says the operation was led by Farah Hamed, 45, a Hamas member from the West Bank town of Silwad who was deported to Gaza as part of the 2011 Shalit deal. 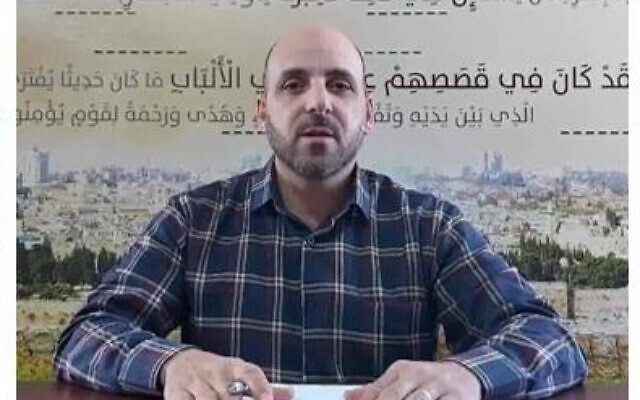 Farah Hamed, a Hamas member from the West Bank town of Silwad who was deported to the Gaza Strip as part of the 2011 Shalit deal, accused on January 25, 2023 of directing attacks in the West Bank. (Shin Bet)

The Shin Bet said Hamed was a member of the Gaza-based terror group’s so-called “West Bank headquarters,” a unit involved in advancing terror attacks against Israel from the West Bank.

Several of the suspects have been indicted at a military court for various security offenses, including illegal arms dealing.

The Shin Bet detailed the cases of two of the suspects.

The first, Salam Ziad, 27, from the Jalazone refugee camp was contacted on Facebook in July by an account under the name Haled Taleb, offering work for a Turkish courier company that works in the West Bank.

Ziad was first tasked with transferring thousands of dollars between different areas in the West Bank, without knowing their intended use.

The Haled Taleb account then presented himself as someone who works for Mohammed Dahlan, a senior Palestinian Authority politician, and instructed Ziad to purchase several firearms, the Shin Bet said.

Ziad purchased three assault rifles, two handguns, and ammunition with the help of his cousin, Ahmed Ziad, also from Jalazone, and was tasked with delivering them to a Hamas operative in Huwara, according to the statement. 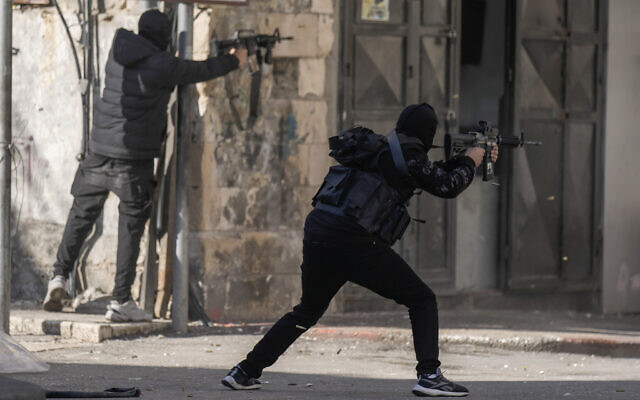 The weapons were given to brothers Mohammed and Mahmoud Ghazi, who were accused of opening fire at Israeli vehicles on the Route 60 highway, near Huwara on September 9, 2022.

The second suspect detained by the Shin Bet, Mohammed Yazen Jabar, 21, from a-Ram in East Jerusalem, responded to an ad on Facebook seeking workers for a restaurant. Jabar was then contacted by an account going by the name Abu Alaa, who said he was seeking deliverymen to transfer packages of perfume to the West Bank.

In August, Abu Alaa instructed Jabar to purchase and deliver assault rifles and handguns to two Hamas operatives in the West Bank, who were both also arrested.

“The Shin Bet’s investigations revealed that some of the money reached those recruits through digital currency traders, who were also deceived by Hamas members,” the agency said. 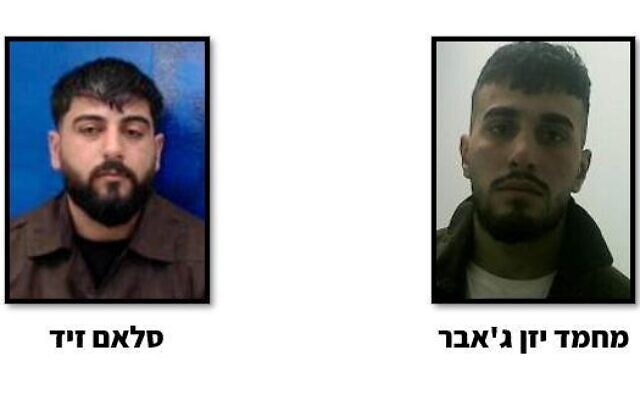 In response to the attempts by the Hamas operatives to set up attacks, Israel revoked the entry permits to Israel from 230 of their relatives.

A senior security official said “the actions of Hamas and the other terror groups in the Gaza Strip will lead to a reduction in the number of entry permits for workers from Gaza to Israel.”

The service warned that the Gaza-based terrorist group was increasingly trying to carry out attacks in the West Bank and Israel.

The arrests came at a time of rising violence in the West Bank, with the IDF pressing on with an anti-terror offensive to deal with a series of attacks that left 31 people in Israel dead in 2022.

The IDF’s operation has netted more than 2,500 arrests in near-nightly raids. It also left 171 Palestinians dead in 2022, and another 19 since the beginning of the year, many of them while carrying out attacks or during clashes with security forces, though some were uninvolved civilians.

We’re really pleased that you’ve read X Times of Israel articles in the past month.

That’s why we started the Times of Israel ten years ago – to provide discerning readers like you with must-read coverage of Israel and the Jewish world.

So now we have a request. Unlike other news outlets, we haven’t put up a paywall. But as the journalism we do is costly, we invite readers for whom The Times of Israel has become important to help support our work by joining The Times of Israel Community.

For as little as $6 a month you can help support our quality journalism while enjoying The Times of Israel AD-FREE, as well as accessing exclusive content available only to Times of Israel Community members.

Thank you,
David Horovitz, Founding Editor of The Times of Israel

Already a member? Sign in to stop seeing this