Putin is facing defeat in the information war 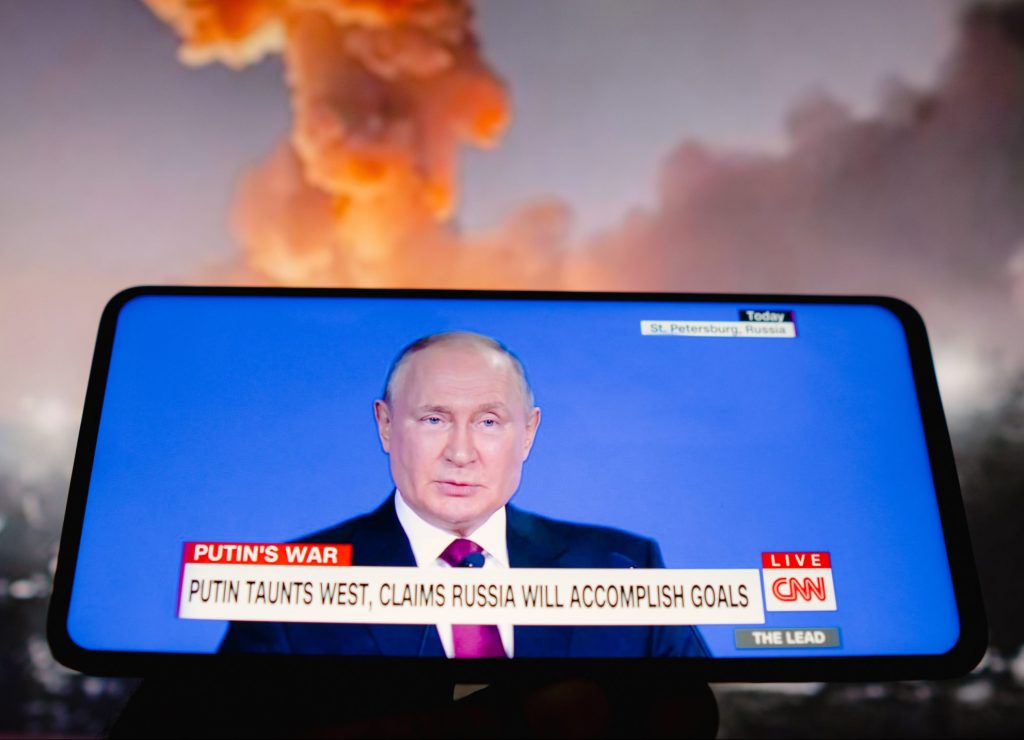 As the world prepares to mark International Holocaust Remembrance Day on January 27, the European Union has accused Russia of “trampling on the memory” of the six million Jews who perished in the Holocaust. This rebuke came following controversial recent comments by Russian Foreign Minister Sergei Lavrov, who compared Western support for Ukraine to the Nazi genocide of European Jewry.

Speaking on January 18, Lavrov claimed a coalition of Western countries led by the United States was following in the footsteps of Napoleon and Hitler with the goal of destroying Russia. “They are waging war against our country with the same task: the final solution of the Russian question,” he said in direct reference to Hitler’s infamous “final solution” of the Jewish question.

Lavrov’s Holocaust comparison was met with widespread international criticism. In a strongly worded statement, EU foreign policy chief Josep Borrell said his Russian counterpart’s comments were “entirely misplaced, disrespectful, and trample on the memory of the six million Jewish people, and other victims, who were systematically murdered in the Holocaust. The Russian regime’s manipulation of the truth to justify their illegal war of aggression against Ukraine has reached another unacceptable and despicable low point.”

The Israeli Foreign Ministry branded Lavrov’s remarks “unacceptable,” while French diplomats said the Russian foreign minister’s attempt to compare international opposition to the invasion of Ukraine with the Holocaust was “outrageous and disgraceful.” Meanwhile, UK Foreign Secretary James Cleverly called Lavrov’s comments “totally abhorrent” while noting, “Russia is not the victim. Russia is the aggressor.”

In the US, national security spokesperson John Kirby expressed indignation at Lavrov’s attempt to draw parallels between the Nazi genocide and the response to Russia’s attack on Ukraine. “How dare he compare anything to the Holocaust, let alone a war that they started,” he told reporters at the White House. “It’s almost so absurd that it’s not worth responding to, other than the truly offensive manner in which he tried to cast us in terms of Hitler and the Holocaust.”

This was not Lavrov’s first flirtation with anti-Semitic historical distortions. During an appearance on Italian TV in spring 2022, Russia’s top diplomat sparked outrage by repeating the notorious anti-Semitic trope that Hitler was Jewish. When asked why Russia insists on calling Ukraine a “Nazi state” despite the fact that Ukrainian President Volodymyr Zelenskyy is Jewish, Lavrov replied that Nazi leader Adolf Hitler “also had Jewish blood.”

The fallout from Lavrov’s very public descent into the squalid world of anti-Semitic conspiracy theories was predictably severe. Following a chorus of international condemnation led by Israel, Vladimir Putin was eventually obliged to intervene. In early May, the Russian dictator called the Israeli Prime Minister to personally apologize on behalf of his foreign minister.

As the world watches the Russian invasion of Ukraine unfold, UkraineAlert delivers the best Atlantic Council expert insight and analysis on Ukraine twice a week directly to your inbox.

The international backlash over Lavrov’s blunders illustrates the limitations of the propaganda narratives developed by Moscow to justify the invasion of Ukraine. While captive audiences inside Russia have been largely convinced by attempts to blame hostilities on “Ukrainian Nazis” and the “Russophobic West,” these unsubstantiated arguments have proven far less persuasive internationally and have served to further undermine the Kremlin’s dwindling credibility.

Russian attempts to portray Ukrainians as Nazis are nothing new and can be traced back to Soviet wartime propaganda. The tactic has been enthusiastically revived by the Kremlin in recent years to dehumanize Ukrainians and legitimize attempts to extinguish Ukrainian independence. This plays well in modern Russia, where the Putin regime has fostered a cult-like reverence for the Soviet role in World War II that includes the demonizing of all opponents as “fascists.” However, the lack of any actual evidence to support these poisonous allegations has left outside observers deeply skeptical.

As Lavrov himself discovered during last year’s disastrous Italian TV interview, most people living beyond the suffocating confines of the Kremlin propaganda bubble regard the election of Ukraine’s Russian-speaking Jewish President Volodymyr Zelenskyy as convincing proof that Ukraine is anything but a Nazi state. Likewise, the consistent failure of Ukraine’s far right parties to secure more than 2% of the vote in national ballots makes a mockery of Moscow’s entire “Nazi Ukraine” narrative. In the eleven months since the full-scale invasion of Ukraine began, Russia has yet to identify any of the “Nazis” it claims to be fighting or define exactly what the stated war aim of “de-Nazification” means in practice.

Lavrov’s lurid allegations of anti-Russian plots suffer from similar problems. While domestic audiences in Russia have been conditioned for decades to view their country as a blameless victim of irrational Western Russophobia, there is a growing consensus in the wider world that the international community has actually been much too slow to react to the mounting threats posed by Putin’s Russia.

Far from pursuing the destruction of Russia, the West responded to Moscow’s wars of aggression in Georgia and Ukraine with a series of misguided resets and endless policies of appeasement. Indeed, it was not until Putin launched the biggest European conflict since World War II last February that Western leaders finally and reluctantly acknowledged the necessity of countering the Kremlin. Even now, as Russia’s invasion approaches the one-year mark, the debate over Western support for Ukraine remains dominated by excessive caution and a debilitating desire to avoid escalation. These are self-evidently not the actions of an international coalition seeking “the final solution to the Russian question,” as Lavrov so absurdly claims.

It is still far too early for Ukraine to declare victory in the information war. Russian disinformation narratives continue to resonate on the vocal fringes of Western society while also appealing to widespread anti-Western sentiment in much of Asia, Africa, and South America. Nevertheless, the wholesale revulsion over Lavrov’s recent Holocaust remarks is a timely reminder of the increasingly unbridgeable gap separating Russia’s alternative reality from the real world.

Almost one year since the full-scale invasion of Ukraine began, only a handful of fellow pariah states are still prepared to stand with Russia on the global stage as international audiences reject Kremlin claims of phantom fascists and anti-Russian conspiracies. Instead, there is growing recognition that the war in Ukraine is an act of naked imperial aggression that threatens to destabilize the wider world.

Russia’s attack on Ukraine has been built on an unprecedented web of deceit and distortion. As these lies lose their power and the reality of Putin’s genocidal agenda becomes impossible to ignore, a consensus is emerging that the war in Ukraine will only end when Russia is decisively defeated.

Peter Dickinson is Editor of the Atlantic Council’s UkraineAlert Service.

The views expressed in UkraineAlert are solely those of the authors and do not necessarily reflect the views of the Atlantic Council, its staff, or its supporters.

The Eurasia Center’s mission is to enhance transatlantic cooperation in promoting stability, democratic values and prosperity in Eurasia, from Eastern Europe and Turkey in the West to the Caucasus, Russia and Central Asia in the East.

Follow us on social media
and support our work