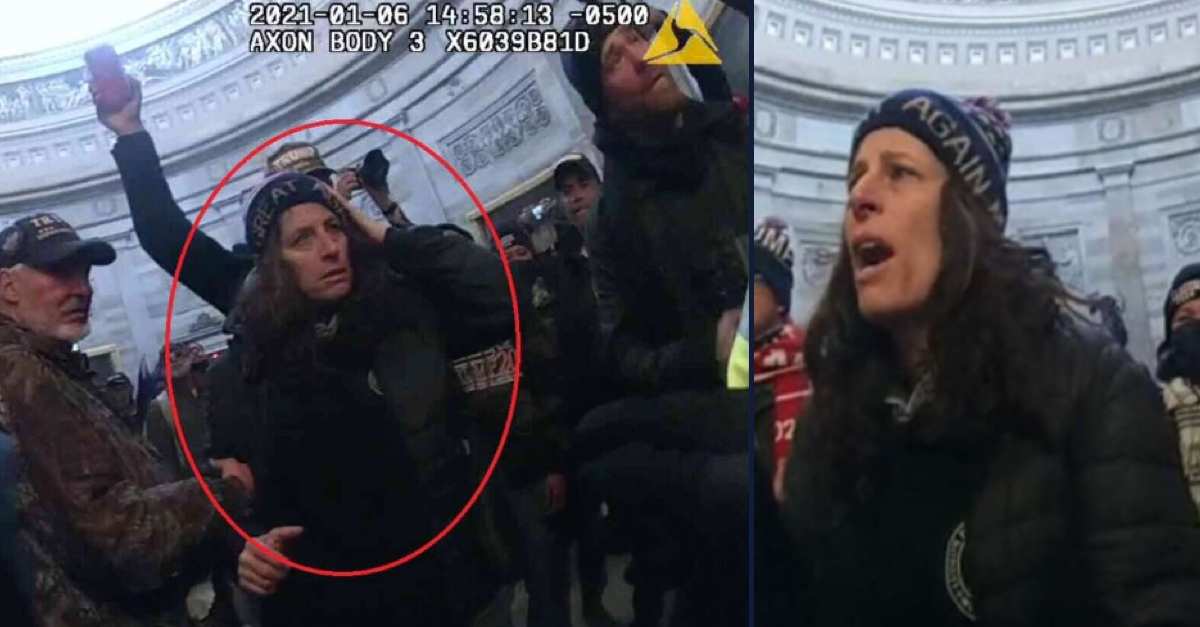 Pauline Bauer is seen inside the U.S. Capitol building on Jan. 6, 2021 (via FBI court filings).

The Pennsylvania pizzeria owner who demanded that police at the U.S. Capitol “bring Nancy Pelosi out” to the mob of Donald Trump supporters on Jan. 6 has been convicted of all five charges against her.

Pauline Bauer, 55, who memorably spouted sovereign citizen talking points before U.S. District Judge Trevor McFadden, was charged with obstruction of an official proceeding of Congress, a felony that carries a potential 20-year prison sentence, and misdemeanor charges of trespassing and disorderly conduct.

According to prosecutors, Bauer screamed at police gathered in the Capitol to produce then-Speaker of the House Pelosi (D-Calif.), who was among the lawmakers at the Capitol that day to certify Joe Biden‘s 2020 electoral win. Bauer was standing approximately 30 feet from the House Speaker’s office when she was recorded by police-worn body cameras.

When a Metropolitan Police Department officer tried to push Bauer away from the area he was protecting, she engaged in a confrontation, the DOJ says.

“You back up,” she screamed. “Don’t even try.” Prosecutors say that she then pushed the officer. She was physically removed from the Rotunda by MPD officers in riot gear shortly thereafter.

Prosecutors presented evidence of Bauer’s confrontation with police in the Capitol Rotunda that day, as well as texts and social media postings both on Jan. 6 and in the days following suggesting that the pro-Trump fight was far from over.

“We need to stand firm and strong now more than ever,” she wrote in a text message on Jan. 8.

Evidence also showed that Bauer was among the thousands of Americans who believed the false claims that Biden won the election due to voter fraud.

“We took over our capital [sic] like patriots for a stolen election one person was shot with a rubber bullet by the cops,” she wrote in a comment on Facebook the evening of Jan. 6, according to prosecutors.

The verdict comes after a two-day bench trial in front of McFadden, a Trump appointee who was the first judge to acquit a Jan. 6 defendant of multiple misdemeanor charges. Bauer represented herself, although defense attorney Carmen Hernandez — who represents Proud Boys member Zachary Rehl, currently on trial for seditious conspiracy and other charges — stayed on as advisory counsel.

At Tuesday’s sentencing hearing, McFadden told Bauer that she was one of the rioters who posed an “obvious and grave security risk,” according to CBS News. The judge reportedly rejected Bauer’s defense that she “blacked out” during the riot.

Bauer had faced off against the judge several times over his decision to keep her in pretrial detention. In one memorable exchange, she told McFadden that she was “not a person” and claimed to have diplomatic immunity before getting into a Bible quote battle with the judge. McFadden ultimately decided to revoke her release for refusing to comply with the mandatory conditions, a decision which was upheld on appeal.

According to the court docket, Bauer was released in September, some four months before her trial began.

Bauer’s co-defendant, William Blauser, pleaded guilty in November 2021 to a single misdemeanor count of parading, demonstrating, or picketing in a Capitol building. McFadden sentenced Blauser in February to probation and ordered him to pay a $500 fine, apparently believing that the military veteran had “probably been coerced in one way or the other by Ms. Bauer.”

Bauer faces up to 20 years on the obstruction charge and three years on the combined misdemeanor charges. McFadden has set sentencing for May 1, and according to CBS News, McFadden agreed to allow Bauer to stay out on release until then.

Have a tip we should know? [email protected]