Millions protest and strike in France to reject pension cuts


With a tremendous jolt to the government’s attempt to raise the legal retirement age from 62 to 64 years, over 2 million people stopped work Jan. 19 and came out into the streets. They were heeding a Jan. 10 call from a coalition of all the major unions in France. 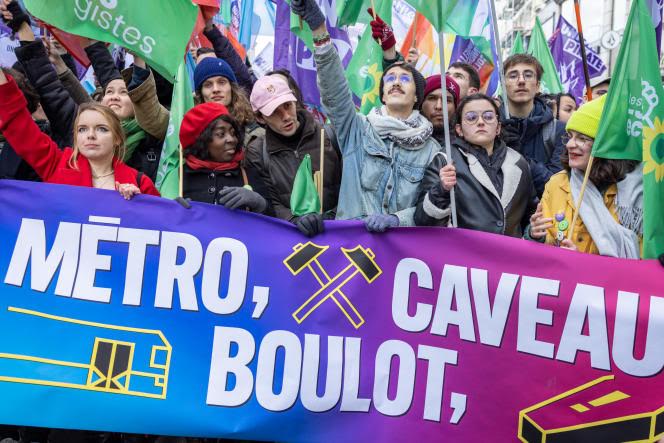 Even if it was clear that a demonstration/general strike was in the offing, such a turnout supports public opinion polls reporting that four out of five people living in France oppose what the government calls a pension “reform.” Workers not only rejected the rise in retirement age from 62 to 64, but they also demanded it be reduced to 60.

The size and breadth of the protest shows the widespread depth of the feeling against this pension “reform,” even in isolated, rural areas, and it puts tremendous pressure on President Emmanuel Macron and Prime Minister Elisabeth Borne.

The 400,000 people who came out in Paris to protest had an impact on the president. Instead of facing them, Macron fled to Spain with 11 of his top ministers. Macron’s background is as a banking official, and his closest ties are to international banking and the big European bourgeoisie.

Fabien Roussel, national secretary of the French Communist Party, caught the mood of the moment when he described the government’s “violence,” which would “hit the people hard,” especially the poorest people. “We are going to make the walls of the Elysée tremble. All together, all together.” [The Elysée is the seat of the French government.]

The television reports on the demonstration mainly focused on those who are already retired, coming out in solidarity with the active workers, the youth expressing fear for their future, and dance groups dressed in “Rosie-the-Riveter” outfits opposing this cut in retirement benefits. A broad swath of the people living in France came out.

Refinery workers, who have been striking from time to time over the past month, said they appreciated the support the demonstration gave them. Electricity workers made it known that they had consciously reduced output by 50%, which gave an opening to the calls for “blocking production” if the government doesn’t back down.

This outbreak of class struggle in Paris appears off to a good start for the workers.