The rates charterers pay for vessels to move LNG cargoes across the world are declining, especially in the Atlantic Basin, as global natural gas prices dip and ship availability surges after months of tightness. 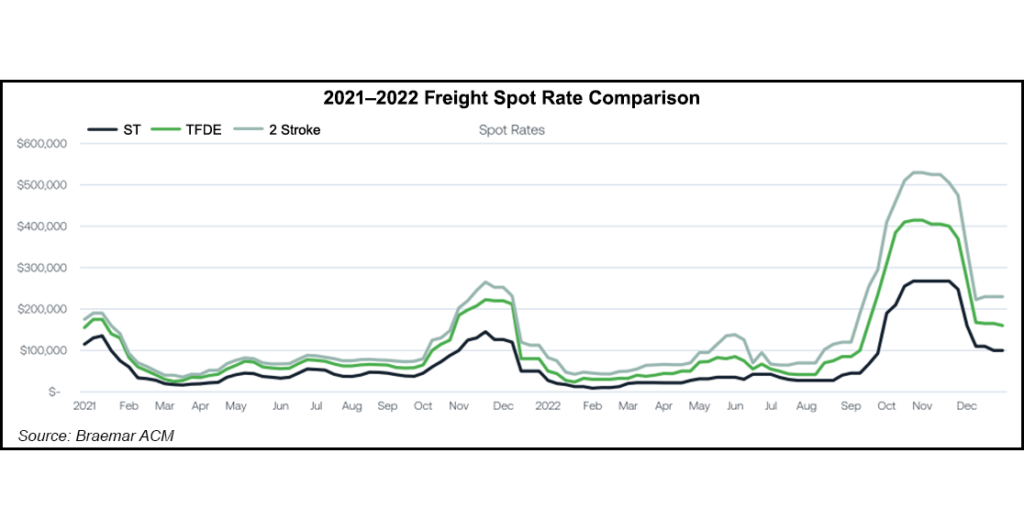 Spark CEO Tim Mendelssohn told NGI that rates have fallen sharply since the beginning of the year as more vessels have become available amid a slump in demand for cargoes. Increasing tonnage in the market is helping to drag down freight rates, he added.

The amount of LNG stored for prolonged periods at sea has also dropped to the lowest point since early May, freeing up ships, according to data from Kpler. Around 0.3 million tons (Mt) of LNG were being tracked in storage at sea, compared to the high of 3.4 Mt in October.

Analysts with shipbroker Fearnleys AS said rates east of the Suez Canal appeared to be holding at higher levels compared to the west of the canal as Asian gas prices took the premium over Europe, adding to a current shortage of large vessels in the Pacific.

Fearnleys analysts said in a note to clients last week that the “prospect of a Freeport restart” and colder weather for northern China and parts of Europe could lead to more vessel traffic. Energi Danmark analysts also wrote natural gas demand appeared to be rising in Europe as “gas is becoming more competitive in the energy mix,” thanks to the price decline. However, forecasts for a brief cold snap followed by more mild weather could push prices down further.

Freights have been gradually dropping after leveling off in December. Rates previously reached record highs through late September to mid-November as countries secured winter storage. Rates have typically spiked during the fall and early winter, but last year’s heights nearly doubled 2021’s high points, with rates for modern vessels nearing $280,000/day, according to data from shipbroker Braemar ACM.

While rates may be heading further down, the amount of LNG volumes moving on the sea has not appeared to slow, according to Kpler. Projections showed around 38.3 Mt have been shipped so far this month, outpacing December. Around 6.8 Mt of those cargoes were tracked from U.S. terminals.

The United States saw the largest growth in LNG export volumes last year, according to Braemar. The country exported around 6 Mt in additional LNG cargoes compared with 2021, followed closely by Norway at 5 Mt.