Joe Biden wants to ban assault weapons again in America: The 1994 ban on these firearms and why it expired


Two days. Three shooting incidents. Eighteen people dead. This is America for you in 2023. As scenes of agony, loss and horror become all too familiar, President Joe Biden, on Tuesday, once again called on Congress to pass a federal law banning assault weapons.

“We know the scourge of gun violence across America requires stronger action. I once again urge both chambers of Congress to act quickly and deliver this Assault Weapons Ban to my desk, and take action to keep American communities, schools, workplaces, and homes safe,” Biden said in a statement.

Also read: More mass shootings than days of the year: The grim reality of gun violence in the US

As America continues to grapple with the problem of gun violence, here’s a better understanding of assault weapons that the president wants to ban across the nation and the challenges in doing so.

What exactly constitutes an assault weapon? The definition of this type of arm has been contentious in America and something that riles up some gun advocates. Many of the large gun groups actually consider ‘assault weapon’ as a made-up term by the anti-gun lobby in the 1980s and maintain that guns “don’t assault people”.

However, traditionally an assault weapon is one that is a semi-automatic gun designed for military use and has “select fire capabilities”. Assault weapons are uniquely lethal because of their rapid rate of fire and high muzzle velocity — coupled with high-capacity magazines, which attach to an assault weapon to allow dozens of gunshots without needing to reload. A high-capacity magazine is typically defined as any magazine or drum that is capable of holding more than either 10 or 15 rounds of ammunition. 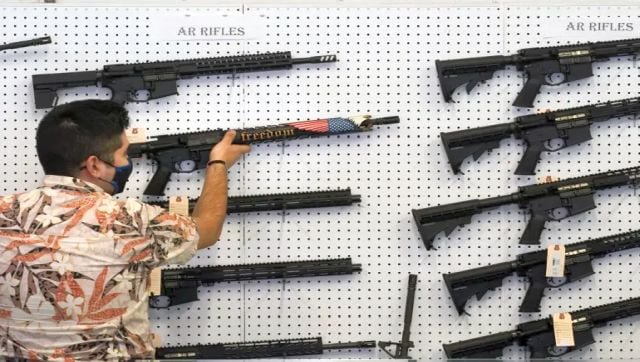 Traditionally an assault weapon is one that is a semi-automatic gun designed for military use and has “select fire capabilities”. File image/AFP

One of the most popular examples of an assault weapon is the AR-15 rifle — called “America’s Rifle” in a January 2016 blog post from the National Rifle Association. This style of firearm has been infamously used in several of America’s tragic shooting incidents — from last year’s deadly Uvalde shooting in Texas to 2018’s Stoneman Douglas High School case in which 17 people died.

Now, that we have understood what constitutes an assault weapon, let’s move on to the growing calls for a ban on such firearms.

The White House said it was renewing a push for sweeping gun control measures in the Senate that would renew the assault weapons ban that expired in 2004. Yes, that’s right. The country did have a ban on assault weapons, but it lapsed in 2004.

The federal ban on assault weapons came into place after a series of shootings in Stockton, California, and on 101 California Street in 1993. California senator Dianne Feinstein had authored the legislation — The Public Safety and Recreational Firearms Use Protection Act, popularly known as the Federal Assault Weapons Ban (AWB), which was a subsection of the Violent Crime Control and Law Enforcement Act of 1994. 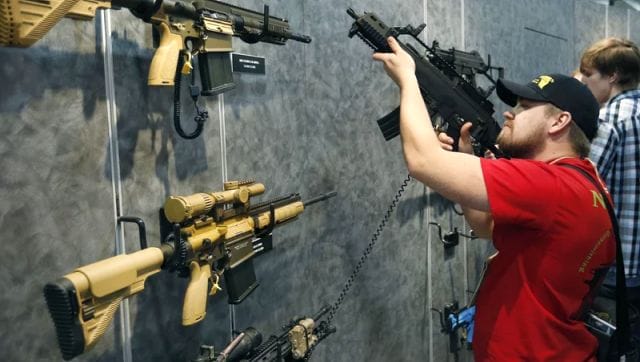 A visitor peruses H&K rifles at the SHOT Show in Las Vegas. Such weapons were once restricted under a 1994 ban that expired with changing politics in the United States. File image/AP

At the time, Biden, a senator, had strongly supported the bill and it was signed into law by President Bill Clinton.

The law prohibited “the manufacture, transfer, or possession of a semiautomatic assault weapon”. It also banned magazines that could accommodate 10 rounds or more. However, the law allowed those who already had these guns to keep them.

To secure the votes for the bill, the sponsors of it allowed for a “sunset provision” by which the 1994 ban would automatically expire after 10 years unless renewed by a vote of Congress.

Time went on, the political scenario changed, and Congress didn’t reauthorise the ban, meaning the sale and manufacture of these firearms was once again made legal on 13 September 2004.

Prospects of another ban

Since the ban on assault weapons lapsed, there have been calls to renew it. In fact, in 2019 after the deadly shootings in a Walmart in Texas’ El Paso (23 people were killed) and Ohio’s Dayton (nine people were gunned down) former President Bill Clinton had urged that the federal assault weapons ban be reinstated.

He had then tweeted, “How many more people have to die before we reinstate the assault weapons ban and the limit on high-capacity magazines and pass universal background checks?”

Similarly, after the recent shootings, there’s been a renewed call for the ban — but the hopes of it clearing the halls of Congress seem bleak. 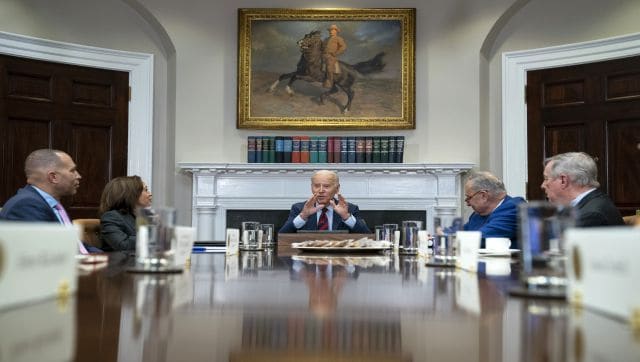 President Joe Biden speaks during a meeting with Democratic lawmakers in the Roosevelt Room of the White House. Biden once again raised the issue of banning assault weapons across the country. AP

However, even as there are calls for a federal ban, there are some states in American, which have already passed legislation on the matter.

Currently, nine states (Illinois, Delaware, California, Connecticut, Hawaii, Maryland, Massachusetts, New Jersey, New York) and Washington, DC, ban assault weapons, and two more regulate elements of their possession or purchase. These laws are all slightly different, but all work to prevent these weapons of war from being readily available to the general public.

However, the state and even federal ban on assault weapons is met with resistance from gun supporters and the National Rifle Association (NRA). They argue that a ban on any firearm is against their constitutionally protected right to bear arms.

It is left to be seen if America does pass any legislation on gun control, and if they do does it hold up in the court of law. As they say, only time will tell.

With inputs from agencies