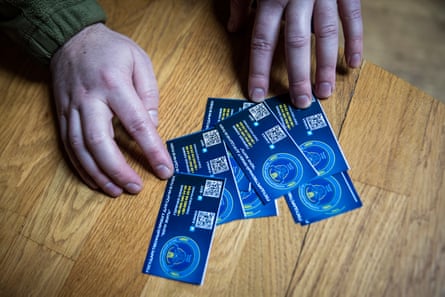 ‘I want to live’: the Ukraine hotline encouraging Russians to surrender


More than 6,500 Russian military personnel have sought to surrender through a bespoke “I want to live” hotline, Ukraine’s government has claimed, with the call centre said to have been recently moved to a secret location to avoid Moscow interference.

Vitaly Matvienko, spokesperson at the department for prisoners of war, said those who had made contact through the service had been verified as serving in the Russian forces using their personal data and service number.

Between 15 September, when the hotline launched, and 20 January, it is claimed that 6,543 Russian personnel contacted the Ukrainian government to surrender themselves into their custody, often from the frontline.

The hotline, fielded by 10 operators, had been established following Vladimir Putin’s announcement of a mobilisation of 300,000 civilians with previous military experience to join the Russian war effort.

Matvienko declined to comment on the number of completed surrenders but described the service, which is staffed 24/7, as “totally successful”, with between 50 and 100 calls and messages to the service’s Telegram channel being received every day.

The call centre was moved a month ago from the department’s Kyiv offices to a secret location due to fear of it being targeted by Russian attacks, he said.

The propaganda value is clear for Ukraine’s government, with 2 million people having visited the I want to live website in December alone, of which 1.6 million were in Russia.

Those who have handed themselves in are offered the opportunity to be part of prisoner swaps arranged between the Russian and Ukrainian governments or to stay in custody with the potential to remain in Ukraine later or to emigrate.

A total of 1,646 Ukrainian personnel have been released by the Russian government as part of such swaps, Matvienko said. The most recent deal was completed on 8 January when 50 personnel on each side were exchanged, with negotiations on others continuing.

Matvienko said there were two stages to surrendering. “The first stage is Russian soldiers who are mobilised, partly mobilised, not mobilised yet, call to this hotline to this chatbot and say: ‘I’m going to surrender,’” he said. “After that he is obligated to leave his personal data. After the soldier reaches Ukrainian territory, it’s obligated for him to call again and say, ‘I’m going to surrender’ and Ukrainian operators help him to reach a safe place where he meets Ukrainian special forces.”

He said that the levels of interest on the service depended on developments on the battlefield. “During the liberation of Kherson, we had calls from Russians and they told us: ‘Just save our souls because we got stuck somewhere in the mud, our battalion is totally crashed, we have 10 soldiers left, please take us from this mess.’”

Oksana, 25, one of the call centre handlers, said each call was different but that they all gave her hope that the Russian war effort was weakening. “Some people call and say, ‘I’m somewhere in the military. I want to surrender,’ others say, ‘I am afraid to be mobilised in Russia, what do I need to do’. And some of them tell me, ‘I’m on the territory or Ukraine, I want to surrender.’ They are afraid and they don’t know what to do.”

Matvienko personally passes on “I want to live” business cards to the released prisoners as those who have been swapped have been found to have been later redeployed to the battlefield.

The claims of the Ukrainian department for prisoners of war could not be independently verified.