From power outage to skyrocketing inflation: How bad is Pakistan’s economic crisis?

A recent nationwide power outage in Pakistan indicates that the country’s economic condition is at a critical juncture. From skyrocketing inflation to mounting debts and rapidly depleting foreign exchange reserves, this article discusses various factors that are taking a serious toll on Pakistan’s economy. 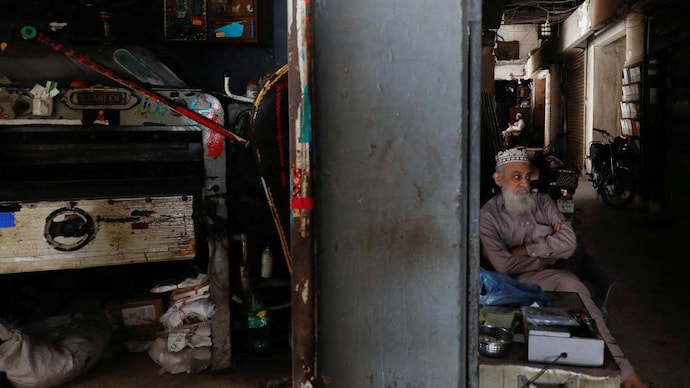 A man sits outside his shop during a country-wide power breakdown in Karachi. (Photo: Reuters)

By India Today Web Desk: Pakistan’s financial crisis is worsening and the country’s economy could soon hit rock bottom. In just a matter of three weeks, the South Asian nation’s inflation has skyrocketed to levels never seen before, and severe food and energy shortages have left over 200 million citizens in huge distress.

A couple of days ago, the world got another glimpse of Pakistan’s acute financial crisis, as the nation plunged into darkness following its worst power outage in months. The country’s overburdened electrical system collapsed on January 23, leading to a nationwide blackout that even impacted densely populated cities like Karachi, Islamabad, Lahore and Peshawar.

The mass power outage left hospitals and schools inoperational, factories were shut down and citizens scrambled to buy fuel for power generators. The outage even impacted internet and mobile phone services in some parts.

While the power was fully restored by Tuesday, such outages have become common in the country, according to citizens. However, the 24-hour outage left citizens shocked and in fear that the economic crisis could worsen further.

What caused the power outage?

While Pakistan has enough installed power capacity to meet demand, it lacks resources to run its oil-and-gas power plants as the sector is heavily in debt – so much that it cannot afford to invest in infrastructure and power lines.

The report also highlighted that analysts and officials blame the country’s power problems on an aging electricity network, which desperately needs an upgrade. However, it continues to be a distant dream as the nation has greater issues to deal with, including a worsening food crisis and sky-high inflation.

The country’s economic condition is at critical juncture as inflation has been rising at unprecedented rates of approximately 25 per cent in 2022, triggering a sharp rise in supplies of fuel and essential food items such as flour, rice and sugar. In fact, there has been a 500 per cent rise in prices of some basic vegetables as well.

While daily power outages have significantly impacted operations of businesses and factories across the country, the government has itself asked major markets and malls to shut down early to conserve electricity, as it does not have adequate reserves to spend on energy required to power such establishments.

In fact, Pakistan’s foreign reserve is precariously lower at just $4.1 billion, barely enough to fund just three weeks of imports. However, commitments to debt repayments could push the country’s reserve below $4 billion soon.

The country is desperately looking to settle differences with the International Monetary Fund (IMF) over a delayed bailout payment that is crucial to provide some breathing space for the government. However, the IMF has not budged from its original decision.

Pakistan Prime Minister Shehbaz Sharif said on January 24 that the country is willing to discuss all demands of the IMF for the stalled funding. It may be noted that the IMF is yet to approve its ninth review to release $1.1 billion to Pakistan, which was originally due to be disbursed in November 2022.

Settling differences over the bailout will be crucial for Pakistan as it will pave the way for the country to secure further bilateral and multilateral funding.