Concussion rules are not protecting players at the World Cup

It didn’t take long for the World Cup to draw fresh attention to elite football’s worrying relationship with concussion.

In the eighth minute of England’s match against Iran at Khalifa International Stadium, Iran’s goalkeeper Alireza Beiranvand dived off his line to intercept a cross and ended up colliding, face first, with team-mate Majid Hosseini. Both players fell to the floor in pain but it quickly became clear that Beirenvand had come off worse.

Iran’s goalkeeper required lengthy treatment from medics to stem bleeding from his nose and underwent examination on the pitch for concussion. Despite appearing to display signs of disorientation and lying flat on his back for around four minutes, Beiranvand was allowed to change his blood-stained shirt and attempt to carry on — after a splash of water to the face from Iran captain Ehsan Hajsafi. In the 17th minute, Beirenvand signalled to the Iran bench that he needed to be substituted and sank back to the floor.

After the game, coach Carlos Queiroz revealed his goalkeeper had been taken to hospital for assessment after suffering a broken nose and “severe concussion”, but provided no real explanation as to why he had initially remained on the pitch. 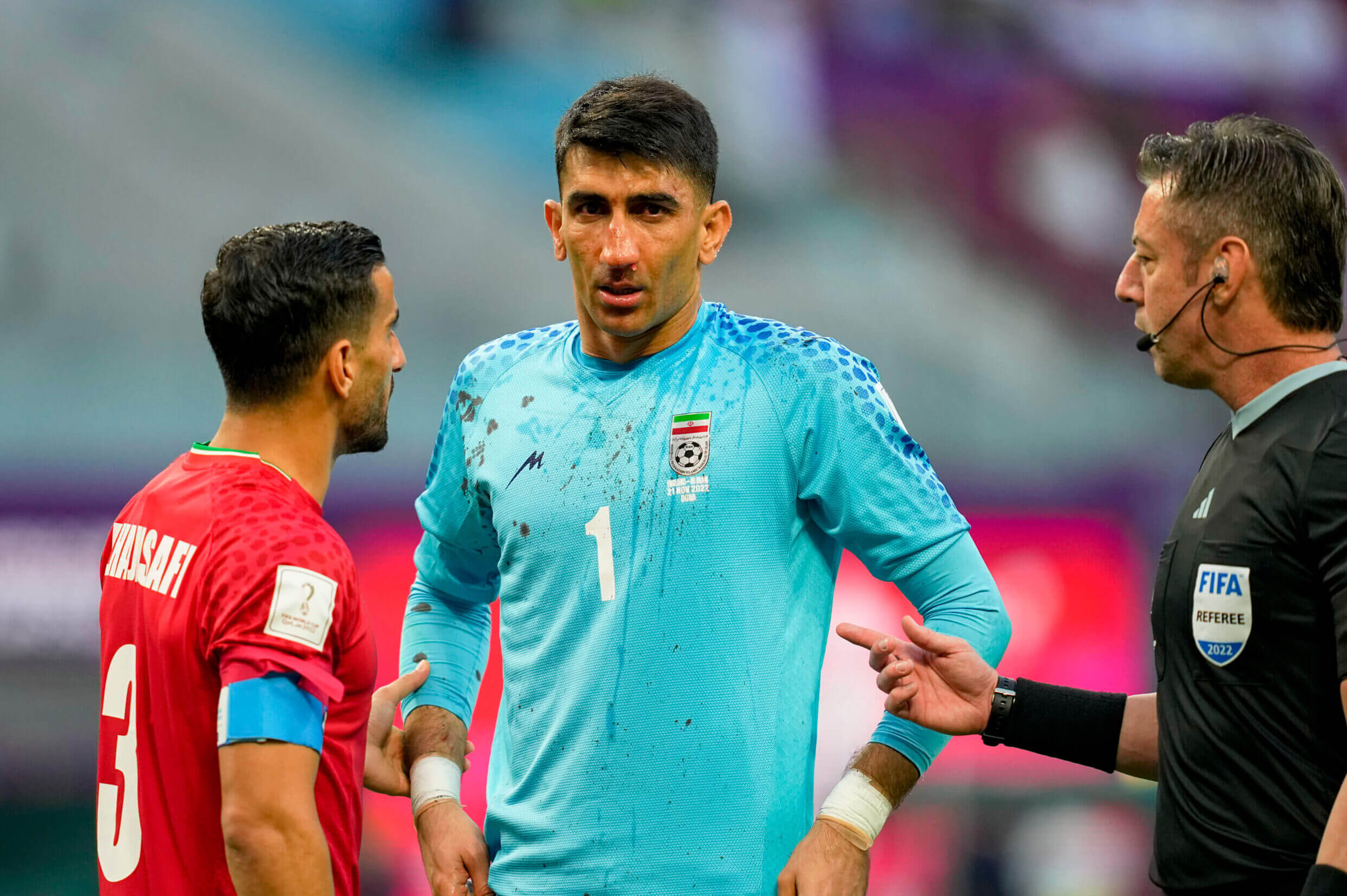 Alireza Beiranvand after being hit in the head against England (Photo: Ulrik Pedersen/DeFodi Images via Getty Images)

The incident was branded an “utter disgrace” by Luke Griggs, interim chief executive of brain injury association Headway, and it underlined that football’s mechanism for dealing with concussions is less than perfect. Beiranvand was allowed to risk further head injury despite Qatar 2022 being the first World Cup where teams can make permanent concussion substitutions that don’t count towards their allotment of five changes.

A trial of permanent concussion substitutions was formally approved by the International Football Association Board (IFAB) in December 2020 to remove one significant impediment to prioritising player welfare: the fear of being placed at a strategic disadvantage in a match by losing a regular substitution. Major leagues and organisations subsequently adopted the rule including the Premier League, English Football League and Football Association.

At the World Cup, teams are allowed to make one permanent concussion substitution per match in addition to their five standard substitutions. But while this framework is a significant improvement on the treatment of concussion at previous World Cups, it still presents a few big problems.

FIFA’s concussion rules state: “If there are signs or symptoms of damage to the brain, or a concussive injury is suspected despite the absence of signs or symptoms, the doctor/therapist should remove the player from the pitch for a more detailed examination (using a concussion substitute if available/required).”

But unlike in the NFL, where three Unaffiliated Neurotrauma Consultants are assigned to each game and examine players suspected of suffering a concussion, FIFA’s system still leaves the final decision about whether or not a player should leave the field for further assessment in the hands of team medical staff. Often, in reality, the opinion of the coach and even the affected player has an influence. This is problematic considering few players will choose to leave the pitch, and coaches might be reluctant to lose key players for the rest of a match.

Within this context, FIFA’s assertion in the wake of the Beiranvand incident — “While the ultimate responsibility in terms of concussion diagnosis and management lies with the relevant team doctor, FIFA expects all teams to act in the best interests of their players and their health” — could be interpreted as naive.

Last month, the Professional Footballers’ Association (PFA) in England renewed calls for IFAB and FIFA to approve the introduction of temporary concussion substitutes, allowing affected players to be replaced on the pitch for a short period while they are examined by doctors on the touchline or in the dressing room.

The idea is that the option of a temporary substitution would make players less disinclined to leave the pitch, and help encourage coaches to take them off, thereby removing two key obstacles to the prioritisation of player welfare.

After the Beiranvand incident, the PFA said: “We have seen a clear example, on the world’s biggest stage, of the current concussion protocols not being applied under match pressure.”

Massive bodily collisions are not as frequent as in the NFL or rugby but football is the only major sport in which the head is routinely used to manipulate the ball. In recent years, football has become significantly more aware of concussions and the risk of brain injury, but many believe the safeguards still fall short of what is required. 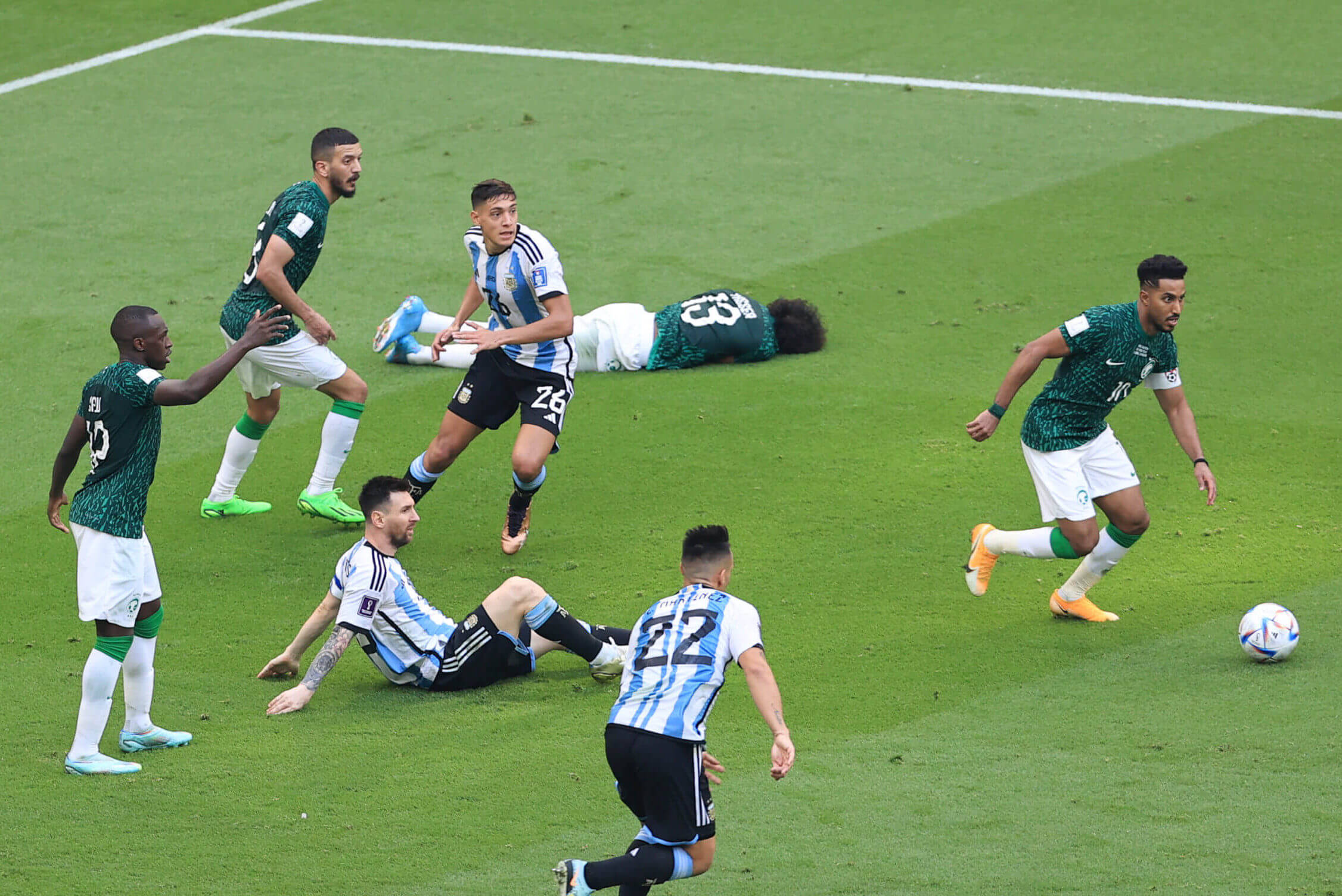 Saudi Arabia’s Yasser Al-Shahrani lies on the ground after a hit to the head, shortly before being stretchered off and taken to hospital (Photo: Simon Stacpoole/Offside via Getty Images)

In 2017, The Athletic columnist and former England striker Alan Shearer presented a BBC documentary — Dementia, Football and Me — investigating the link between repeated heading of a football and an impaired ability to remember, think and make decisions related to daily activities.

Several of England’s 1966 World Cup-winning squad developed dementia and former West Bromwich Albion striker Jeff Astle — renowned for his aerial prowess as a player — was found after his death, aged 59 in 2002, to have developed chronic traumatic encephalopathy (CTE), a form of dementia linked to repeated blows to the head.

CTE will be horribly familiar to NFL fans. Earlier this year, The New York Times reported that it had been found in the brains of more than 320 former NFL players, and in 2015, the league was required to compensate former players who had suffered brain trauma with a $1billion settlement plan.

No such restitution has been made to impacted footballers and their families but in 2020, the PFA signalled a shift in mindset by establishing a task force to examine its response to dementia in football. Among those involved are Shearer’s former Blackburn Rovers strike partner Chris Sutton and Dawn Astle, Jeff’s daughter.

Sutton was among those who reacted most angrily to the handling of Beiranvand’s head injury: “Football’s concussion procedures are an embarrassment,” he wrote on Twitter. “Where is the if in doubt sit it out procedures… I’ll say it again: the football authorities do not care about their players.”