Coinbase and Binance pick sides in stablecoin wars: should traders be concerned about USDT holdings?

Coinbase, one of the largest cryptocurrency exchanges and a co-founder of USD Coin (USDC) has urged traders on its platform to exchange USDT to USDC, offering the transfer for free. The move is seen as part of a ‘stablecoin war’ between rival platforms, and comes after Binance International recently delisted USDC trading pairs. The latest move by Coinbase has been read as exchanges ‘picking sides’ among the competing stablecoins USDC and USDT.

Coinbase and Binance pick sides in rivalry among USDC and USDT

Coinbase and Binance, two of the world’s largest cryptocurrency exchanges recently picked sides between competing stablecoins USD Coin (USDC) and USD Tether (USDT). Both stablecoins are pegged 1:1 to the value of the US Dollar.

Binance International recently delisted USDC trading pairs, a stablecoin co-founded by Coinbase. This was considered a hostile move by the exchange famed for joining the dots behind FTX exchange’s collapse and bankruptcy. Back in November, Binance’s announcement of its decision to sell FTX exchange’s native token FTT triggered a massive crash in the crypto, and caused Samuel Bankman-Fried’s (SBF) crypto platform a crushing liquidity crisis.

Post the FTX bankruptcy, stablecoin Tether, Circle – the issuer of USDC, and Coinbase denied exposure. The rivalry between the two stablecoins USDC and USDT stems from the fact they are owned by different exchanges.USDC is affiliated to Coinbase though it is issued by stablecoin developer Circle. USDT is affiliated to rival exchange Bitfinex whilstTether Limited is actually owned by Hong Kong-based iFinex Inc., which also owns the Bitfinex cryptocurrency exchange.

The three cryptocurrency exchange platforms, Binance, Coinbase and Bitfinex are competitors. Their affiliation with the stablecoins they back has intensified the rivalry and divided traders in the crypto community.

Circle, the issuer of USD-pegged stablecoin USDC, recently issued a statement citing strong competition in the stablecoin market and the increasing pressure on its crypto asset. Circle expects USDC’s growth to be slowed down by the recent changes in crypto.

In a filing to the US Securities and Exchange Commission, Circle said on November 14 that crypto exchange Binance’s auto conversion of USDC into Binance’s stablecoin (BUSD) held in the platform’s wallets has reduced USDC circulation in the quarter ended September 30.

Circle estimates that USDC’s circulation nosedived by $3 billion in response to Binance’s move. The total decline was $8.3 billion QoQ and Circle cited the collapse of large crypto businesses such as FTX, Voyager Digital and Celsius, as well as higher interest rates as the leading cause of the drop.

Circle argued that dampened growth of USDC could hit its other businesses. The company said,

If Circle stablecoins do not grow as we expect, our business, operating results, and financial condition could be adversely affected.

Singapore-headquartered Bybit exchange stepped in to support Circle and declared a partnership to offer USDC spot pairs. Bybit made a statement in September 2022, explaining that it will offer Circle’s services to its users by expanding its USDC spot pair listings to accelerate Bybit’s growth and make it a gateway for retail and institutional USDC-settled products. The exchange introduced USDC options and further diversified its products for crypto traders.

Coinbase’s move to announce the fee-free exchange of USDT to USDC also favors increased adoption and utilization of Circle’s stablecoin. Coinbase informed its users through a blog that “stability and trust” are of utmost importance in light of the recent events in the crypto ecosystem. With rising volatility and declining trust, the exchange labeled its call for conversion from Tether to USDC “a flight to safety.”

Coinbase added that USDC is a trusted and reputable stablecoin, and waiving fees for global retail customers to convert USDT to USDC is their way of offering a frictionless switch to users.

Should traders be concerned about their Tether USDT holdings?

On multiple occasions since 2017, Tether has been labeled a fraud, a scam and has been criticized for its lack of transparency. The stablecoin continues to honor redemptions at the dollar peg and did so even through the collapse of FTX exchange.

According to data from CoinGecko, Tether suffered a temporary de-peg from $1 parity to 97 cents within days of the FTX exchange collapse. The team behind the stablecoin was swift to address the same and continued honoring redemptions. Interestingly, Tether is the third-most widely traded crypto on Coinbase and represents 5% of its trade volume. 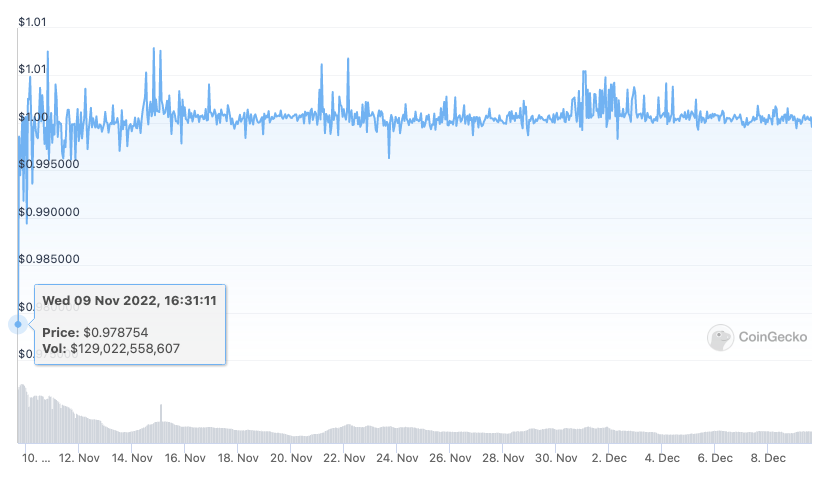 On September 20, Tether was ordered by a US judge in New York to produce its financial records tied to collateral reserves for USDT, i.e to prove the 1:1 backing for the Dollar peg. This is separate from another lawsuit that asked the New York Attorney General to release the documents that it gathered from its investigation into Tether’s reserves. With ongoing lawsuits and questions raised on Tether’s collateral reserves and transparency, crypto exchanges have turned to their own stablecoins: BUSD in the case of Binance, and USDC in the case of Coinbase, and tried to get customers to adopt them instead of Tether.

Coinbase and Binance’s move has divided the crypto community as to the relative security of their stablecoin holdings in USDT, USDC and BUSD.

Tether’s importance in the FTX exchange saga and crypto ecosystem

Tether, the largest stablecoin, has a market capitalization of $65.7 billion. The Tether website states that:

All Tether tokens are pegged at 1-to-1 with a matching fiat currency and are backed 100% by Tether’s reserves. The value of our reserves is published daily and updated at least once per day.

While Tether claims every USDT is 100% backed by reserves, including traditional currency and cash equivalents, they may also include other assets and receivables from loans made by Tether to third parties. Therefore Tether’s assets are partially backed by “other assets and receivables.” Experts believe this could compromise Tether’s ability to convert assets in times of stress and lead it to de-peg, just as the USD was forced to de-peg when it switched from the gold standard in 1971.

If Tether suffered a de-peg, it would have a cascade effect on the value of all cryptocurrencies, partly due to its large market capitalization and its relevance among traders in the ecosystem. Since the FTX exchange collapse pushed several traders out of crypto and risk assets entirely, several traders pulled out of cryptocurrencies, exchanging USDT for fiat. This makes the largest stablecoin in the industry key to the FTX exchange contagion.