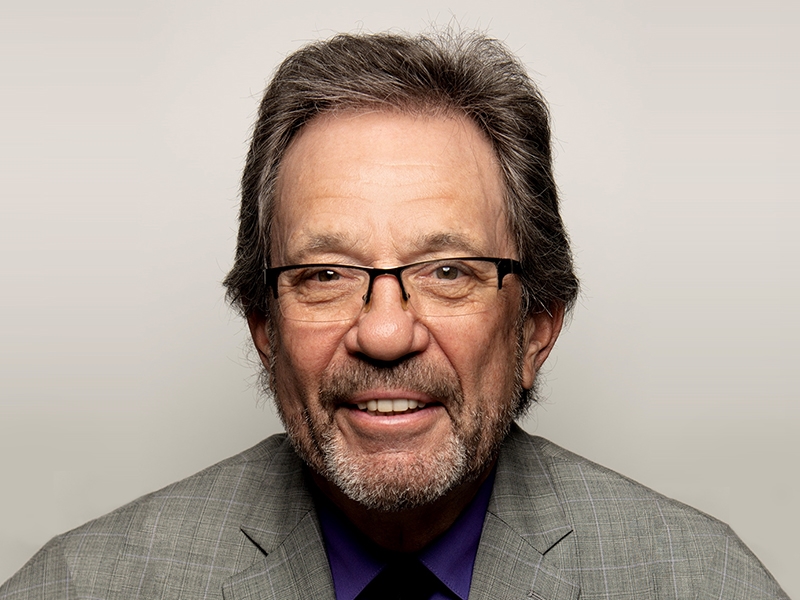 Fred Miller/U of A System Division of Agriculture

John Clark began his career in fruit breeding as a research assistant in July 1980 and retires in January 2023 with the title of Distinguished Professor of horticulture.

Take a walk through the fruit section at your local grocery store or farmers market and you’re bound to pick up a grape, peach, nectarine, blackberry or blueberry with John Reuben Clark’s fingerprints on it.

Over the course of his 42-plus-year career with the U of A System Division of Agriculture and the Dale Bumpers College of Agricultural, Food and Life Sciences, the Arkansas Agricultural Experiment Station fruit breeder and Distinguished Professor of horticulture has been the developer or co-developer of 81 varieties of fruit, including the first primocane-fruiting blackberries that flower and fruit on first-year canes, Prime-Jim® and Prime-Jan®.

The primocane-fruiting trait expands the ripening season into late summer and fall for blackberries and extends the domestic production and marketing season from one to two summer months to potentially more than six months, according to Margaret Worthington, associate professor of fruit breeding and genetics for the experiment station. The primocane-fruiting trait also expanded production to new areas of the world and facilitated organic production, Worthington added.

Clark officially retires from the Division of Agriculture at the end of January.

“Dr. Clark and his program have changed the small-fruit industry both domestically and around the world,” said Wayne Mackay, head of the Horticulture Department. “He has the unique ability to imagine what the consumer desires and then create varieties that match that need.”

“This is most evident in his germplasm licensing that allowed the industry to create new flavored table grape varieties, such as Cotton Candy, that have changed what consumers expect in that product category,” Mackay said. “He is truly a game changer.”

Clark said in the fruit business, “quality is the key” because there are so many new varieties, and there is competition among the fruits.

“I would not have said that 40 years ago,” Clark said. “I would’ve said the key thing is we need blackberries without thorns, and high yield.”

Having accomplished thornless blackberries and developing many other positive attributes for fruit growers, Clark’s work progressed to focus more on consumer tastes and shipping traits that extend the fruit’s viability.

The Bayh-Dole Act of 1980 enabled universities and nonprofit research institutions to own, patent and commercialize inventions developed under federally funded research programs. Although Clark’s predecessor James Moore began patenting varieties in the early 1980s, Clark expanded the intellectual property program, including increased variety patent licensing as well as establishing breeding and testing agreements for the Division of Agriculture starting in the early 2000s. This emphasis later coincided with the development of the Technology Commercialization Office. Income from intellectual property fully supports the Arkansas Fruit Breeding Program, Clark said.

“In addition to his creative eye as a plant breeder, John has a creative perspective on the commercial and marketing side,” said Nathan McKinney, assistant director of the Arkansas Agricultural Experiment Station and a former technology licensing officer in the Technology Commercialization Office. “John was able to marry the science and the business like no other faculty.”

Many of the cultivars Clark developed have found success, Worthington said, particularly for the blackberry industry.

In addition to the varieties released directly from the Arkansas Fruit Breeding Program, Clark has also worked with collaborators at Driscoll’s, International Fruit Genetics and other companies around the world to develop new varieties through breeding agreements using the unique genetics created in the program. Innovative table grape flavors have been moved from Arkansas into IFG proprietary varieties, with the trademarked Cotton Candy and Candy Hearts being some of the most popular examples. The unique flavors developed in Arkansas have generated worldwide excitement in the table grape industry, Worthington said.

Although a world-renowned fruit breeder in his own right, since 2013, Clark has also gained a musical reputation for the melodic guitar instrumentals that he composed to accompany the Division of Agriculture’s YouTube videos that describe new Arkansas fruit varieties. The videos were prompted by Dave Edmark, former experiment station science writer. Fred Miller, experiment station science editor and photographer, produced the original videos and recorded Clark’s music to go with them.

Clark has narrated 29 videos and provided original compositions like “Table Grape Getalong,” which accompanied the release of a group of table grape varieties. The videos have been viewed over 350,000 times.

Sometimes, Clark wrote variety-specific tunes, like “Traveler” and “Dazzle,” that musically capture the traits of the fruits. For example, the song for Prime-Ark® Traveler blackberry has melodies that “travel” up and down the fretboard to underscore the variety’s “traveling and shipping” qualities. The pink wine grape Dazzle called for “flat-picking” to give it “a little zip,” Clark said.

Clark is also a regular columnist for Growing Produce and American Fruit Grower magazine. He has authored over 800 publications in his career, including nearly 400 service and popular press articles, 12 book chapters and 186 refereed publications.

Clark began his journey in plant breeding with the Arkansas Agricultural Experiment Station in early July 1980 as a research assistant for Moore, founder of the fruit breeding program. Clark arrived in Fayetteville with his wife, Sharon, and their 1-year-old son, Johnathan, from their home state of Mississippi. Clark earned his bachelor’s and master’s degrees in horticulture from Mississippi State University and grew up on the J.R. Clark Dairy farm in Madison, Mississippi, where his family also grew beef cows and row crops.

Farming was inherently in his constitution, he says, but fruit breeding was outside of his field until he came to Fayetteville about a year after attending a grape breeders conference at the Division’s Fruit Research Station near Clarksville. He also knew a U of A graduate student, Keith Patterson, at Mississippi State, who told him stories about Fayetteville’s amenities like the Swinging Door music venue on Dickson Street where Patterson had bartended.

With a mind to continue his education in horticulture, a job with Moore that paid $12,000 a year in 1980 allowed him to pursue his doctorate by taking one class per semester as he worked at the Agricultural Research and Extension Center in Fayetteville. In 1983 he completed his Ph.D. and became resident director of the Fruit Research Station and continued to work with Moore on fruit breeding projects until 1996 when Moore retired, and Clark relocated to the Fayetteville campus.

Arkansas Genetics for All

Although the Fruit Breeding Program has always focused on making improvements in varieties for Arkansas, the genetics from these developments sometimes are more valuable to growers outside the state, Clark said.

“The breeding program is here to help Arkansas growers,” Clark said. “That’s our primary focus, so anything that works other places, or if the genetics have value somewhere else, that is always secondary to Arkansas growers.”

McKinney said, “The impact of John’s career is truly worldwide, but his focus on ‘Arkansas first’ has never wavered.”

“This has been a fabulous opportunity,” Clark said. “Inspiration is what contributes to things happening for you and drives enthusiasm, which expands those opportunities. I’m thankful for working for an organization that supported those opportunities. It was a lot of work, and I don’t know how many gallons I’ve sweated, but it has been really something how it all worked out.”

Awards and Other Accomplishments

Over the course of his career, Clark has been recognized with some of the highest honors from the Division of Agriculture and professional organizations like the American Society for Horticultural Science and the American Pomological Society. He has served on numerous committees and boards dedicated to horticulture and fruit breeding and advised four Ph.D. students, 11 master’s students and 13 undergraduate students. Many have gone on to lead breeding and research programs in the public and private sectors. He has also informally served as a mentor to many young researchers and extension specialists across the world. Clark was inducted into the Arkansas Agriculture Hall of Fame in 2018.

To learn more about Division of Agriculture research, visit the Arkansas Agricultural Experiment Station website: https://aaes.uada.edu. Follow on Twitter at @ArkAgResearch. To learn more about the Division of Agriculture, visit https://uada.edu/. Follow us on Twitter at @AgInArk. To learn about extension programs in Arkansas, contact your local Cooperative Extension Service agent or visit www.uaex.uada.edu.